Quite frankly, it's piss poor. This is supposed to be a travelogue, blog, log, whatever, and yet I have only posted two things in the last month; one saying I need a holiday, and the other that I have decided to do fu*k all for the next however long. As far as retaining what lingering reader interest may have survived the last year's laborious nonsense goes, this must surely be the death knell.

Or is it? Maybe I wasn't sleeping, but waiting. Poised menacingly like a tightly coiled and pissed off cobra, waiting to explode in a fury of travelling, eating, cooking, photographing and writing brilliance the like of which the world had never seen. But no. I've just been watching cricket.

Many years ago I was an angry ant of a teenage England football supporter. Spilling beer, shouting and chanting mildly offensive drivel. Around that time I worked with an absolute gent (who was probably only 25 himself) called Danno, who once confided in me that he would rather see England win the Ashes (Cricket - England v Australia) than the World Cup (Football, Soccer). I smiled politely and secretly worried about him.

It might have been the eight years as a bookie, when my patriotism yielded to fiscal pragmatism, but I ended up wanting England to lose things, football especially. When I stopped being a bookie, I assumed my patriotism would return, but it didn't. And it didn't because in order to be patriotic, you need to feel pride, and eleven cashed up bogans strutting around a football pitch failing to replicate the form they show for their paymasters whilst carrying on the pretence of representing their country provokes anger and resentment, not pride.

Cricket is different though. Test cricket is the quintessence of a sporting contest; endurance, technique, consistency, teamwork, planning and execution. The Ashes, to an Englishman or Australian, are the pinnacle of that most refined of sports. And the Boxing Day test match at the Melbourne Cricket Ground (MCG) is the highlight of that. 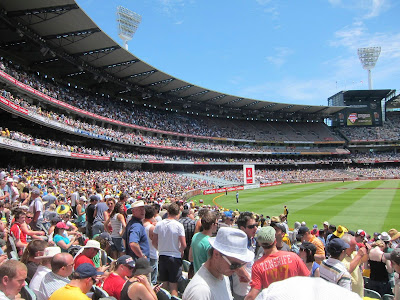 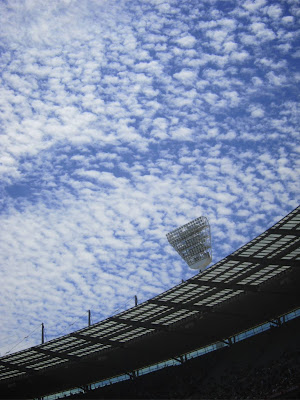 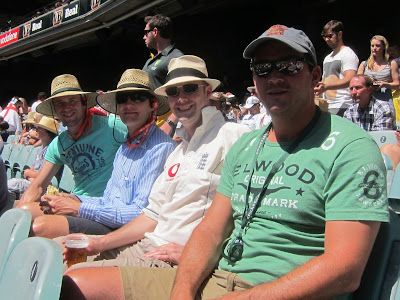 Two Englishmen, a Frenchman and an Australian....


If you are interested in cricket, you know what happened, if you're not I won't bore you; suffice it to say that we utterly destroyed them. It was very special indeed. So special that, after two days at the MCG I decided to shelve a few plans and spend the first week of 2011 in Sydney watching the final match of the series. 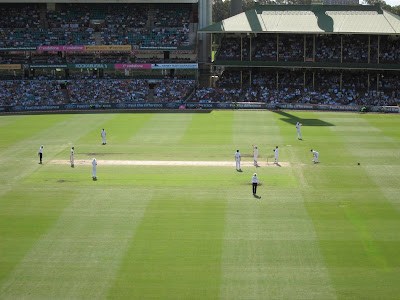 Day 4 at the Sydney Cricket Ground

Five consecutive days of test cricket is an epic thing to watch. Even more so thanks to the demolition of Australian cricket engineered on the field, a rotation of great company in the stands, and the effervescent humour of England's travelling supporters, the Barmy Army. 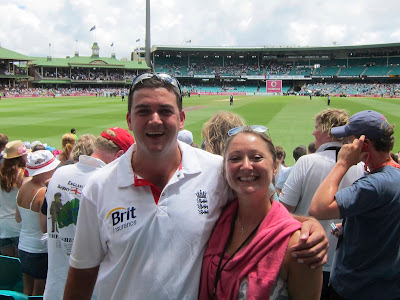 By the final day there were no Aussies left, just a large, vocal contingent of English people there to watch the denouement; the final decapitation of the old foe coming just a few minutes before lunch. Amidst the celebrations though, came a slight shuddering twinge. England's victory arrived courtesy of the brilliant execution of a masterful plan; Australia's demise the result of hubris. Greatness never resides long in the same place; those which were great once are small today, and those which were small have become great.
Posted by Joe at 14:57