Pretty much the only item of warm clothing I've had with me on this trip is my North Face Glacier Fleece. I decided to reward its faithful body warming by taking it up onto its first ever glacier. And if you're going to treat your clothes to days out, you might as well do it in style. So we went up by helicopter.

The Franz Josef glacier is 12km long and stretches down towards the Tasman Sea on New Zealand's spectacular west coast. It exhibits a classic glacial cycle of advance and retreat, and is actually currently growing, despite the best efforts of global warming (discuss).

Getting kitted up for this involves putting on an enormous pair of boots and wearing an oversized bum bag (fanny pack to my American friends). Shortly after strapping the boots on I found myself absent mindedly whistling Walking on the Moon by The Police.

After a short but spectacular ride up in the helicopter we landed about halfway up the glacier, wedged in the valley. The landscape is eerie and other worldly; the ice raw, craggy and blue. 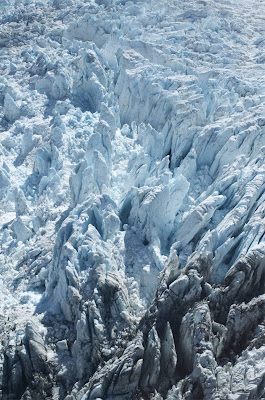 After a quick skid across from the helicopter, we put on our crampons with varying degrees of difficulty. Split into groups of ten or so, we head off our separate ways to hike across the ice and look for strange little caves and formations. Unfortunately for me, our group is headed up by a five year old Chinese girl who is edging her tiny feet worriedly across the surface. "Walk like a dinosaur!" encourages Ned, our cheery and very Kiwi guide, but to no avail. 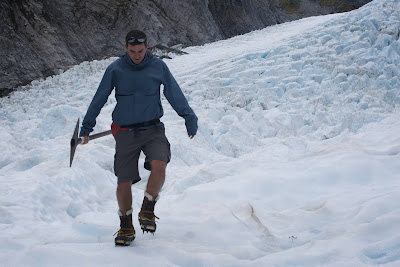 Meanwhile, out the back, and I am really digging the crampons. Forget moonboots, I feel like I could walk vertically in these things, and decide to test their reliability by disappearing on all sorts of tangents rather than partake in the world's slowest ever Conga. Doing so, I got that feeling of being a trespasser again; a landscape so alien and foreign to everywhere else I've been, that you just have to wonder whether we should really be here.

Not just because of the boots, it got me thinking about Moon Dust that I read a few months back. About what it must have been like to have stood on the moon; to feel so remote and detached from the world that we live in and are part of. Whilst the icescape had a similar feel and effect, it was obviously diluted by the hordes of other punters who'd been flown up here to tramp around like morons, so the moment quickly passed. By the time some idiot asks if the water is safe to drink, I've already consumed pints of the stuff. Cold, crisp and delicious; as pure as the driven snow. 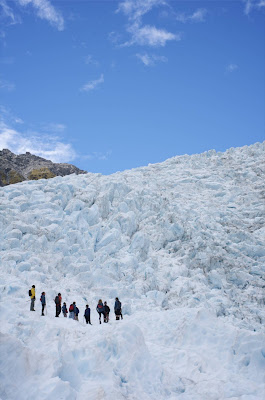 Tiny tunnels and caves are formed as the trickling water cuts its way through the ice. Moulins, where it spirals down and drills out a swirling bore hole. Narrow slot canyons, just like those through the sandstone back in Arizona. The difference here is the timescale; these are created and destroyed over days and weeks, not millions of years. The giant glacier, advancing and retreating through the more permanent landscape, shifts, changes and contorts itself as well. From afar, a great block of ice; up close, a twitching, living thing in constant flux. 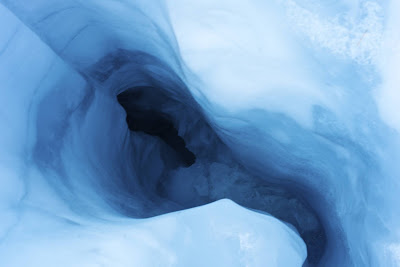