Land of the smiling sun

The last boat I took was from Rosslare to Fishguard on my way back from Ballymaloe. I smuggled myself away in the premier lounge with about three other people in an attempt to distance myself from the baying mob of pikeys attacking the fruities downstairs. 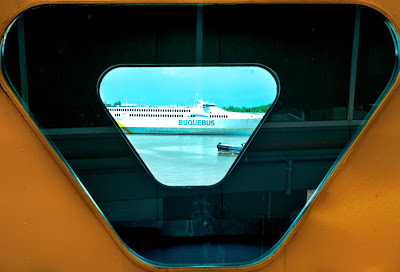 The Buenos Aires - Montevideo catamaran bears a few similarities. It too takes around three and a half hours. It too crosses a stretch of water stained by the skidmarks of history. It too, has its fair share of chavs. But I'm in a better mood this time. No longer pensive and curling my hair with the nervous anxiety of a man who hasn't the faintest idea what he is doing - now I just don't have the faintest idea what I'm doing.

I rush off the ferry, determined to be one of the first in line for the cashpoint so I don't get skanked for a cab. But the scen to my left, across the harbour in the twilight, is special. Can I be arsed to stop, rummage through my bag for the camera, fuck about swapping lenses and take the shot? I hesitate. No, I can't be arsed. Or can I? I can. I stop. The chavs push past me, but I gladly relinquish my place in line and take my first picture in Uruguay. 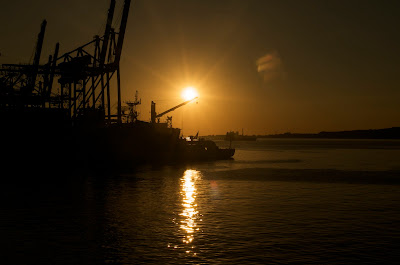 I obligingly follow in the footsteps of many a seasoned traveller and get completely ripped off on the cab ride from the ferry terminal. This guy doubles up as some kind of bootleg bureau de change it would seem, and manages to shaft me both ways, in and out. He has a captive audience so I can't really complain. And asking him to take me to the London Palace Hotel, I guess I had it coming. He drives like a complete fucking lunatic. Five minutes later and about a tenner shorter and I am here.

For reasons that completely evade me, I am certain I will like Uruguay. Maybe it's because they have a big smiling sun on their flag? Who knows. From the window of my hurtling cab, I think I saw just enough of Montevideo to confirm my suspicions. That feeling you get, when you first arrive in a place? No question. There is a casual swagger to this city. An easy balance between splendour and decay. Tomorrow I take the camera, nothing else, and go for a walk. Something tells me it's going to be a good day. 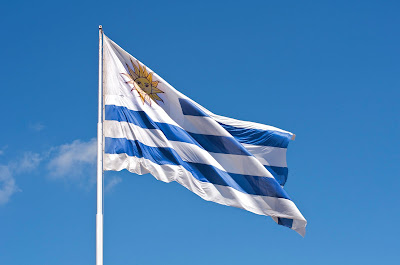