My first night in Montevideo, I head to El Fogón, a parrillada a hundred yards from my hotel. People say the right kind of things about it. It looks good from the outside. Inside it feels like a 1970s Parisian Bistro. I wait for my mesa para uno and watch locals polish their dirty cutlery with the tablecloths. I don’t mind. I have a good feeling about this place. 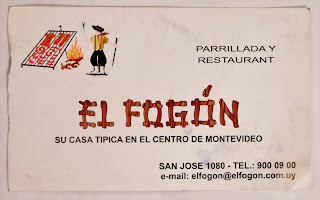 I peruse the menu, but waste my time. The waiter orders for me. Chorizo to start, followed by ‘baby beef’ (whatever that it). In the meantime I order a cerveza de Uruguay and am impressed when it arrives with a chilled glass in it’s own specially crafted ice bucket.
Next, my sausage arrives. It is without garnish, unless you count the bit of onion skin that has stowed away on the plate. But it is good. Oh, it is good. Succulent, tender and juicy. Well seasoned, with the perfect balance of meat and fat.
My steak, a lomo (fillet) with the chain still attached, is much smaller than I expected. This is a plus in my book - when confronted with a plate of food that is ultimately indigestible, I think the mind reacts accordingly. It is very well seasoned, on the brink of over seasoned probably, but it just about carries, thanks largely in part to its superior quality. I wash it down with some local cabernet sauvignon that you wouldn’t want to drink on its own by the fire on a cold January night. 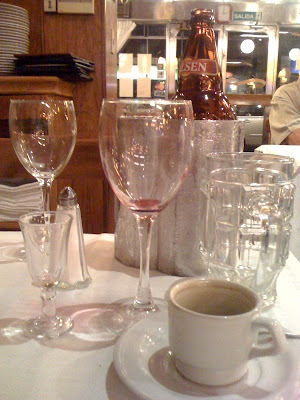 A full complement of empty vessels
Tonight, I decide, its time for a change. I want seafood, or fish, at the very least. I have two choices - Arcadia, the best restaurant in Montevideo, or Los Leños, another parrillada. I’m all for best restaurants, but after a day walking around Montevideo admiring it’s street level beauty, I don’t want to dine on the 26th floor of the Radisson, so Los Leños it is.
I’m still having fish. At least I am until I walk in and see the parrilla. If you are one of those people who struggle with menu choices, come to Uruguay - the waiters order for you. I am having gazpacho (my choice) followed by the specialidad de la casa. Gazpacho is passable (they have Worcestershire sauce here too then). The steak comes and it is overcooked. The ultimate crime. But garnishing it is the best bit of bacon I have tasted. Two big fat rashers of pink, salty pig. If only I could pick them up and walk down to El Fogón with them.
I contemplate dessert. Darina appears to me and makes me order the Tarta de Manzana ("Why can’t anyone make a decent apple tart these days for pity’s sake?"). It is wonderful. It almost erases the memory of the overcooked beef.
Then, inspired, I order a Gin and Tonic. It must have been almost a week since my last one, but that’s long enough to forget. Long enough to forget how quickly, clinically and absolutely, it can restore the entire universe to its proper state of being. Salud!
Posted by Joe at 18:02