Football is kind of a big deal round here. And the biggest deal of all is Boca Juniors v River Plate - possibly the biggest game in club football and No 1 on the Observer's list of sporting events to see before you die.

Tickets are hard to come by for gringos, and much is made of the mortal danger you are in if you attempt to go on your own. Tours are organised with tickets changing hands for a 2000% mark up. If you want to go, you have no choice. And I want to go.

It's been a nice sunny week in Buenos Aires and I've been out and about most days. It hadn't even occurred to me that it might rain yesterday, but rain it did. I popped back for an extra cotton jacket to throw over my shorts and t-shirt, it was raining that much. A raincoat would have been a better idea.

There's a conspicuous band of assorted gringos waiting for the bus outside McDonalds, and we chat about football on our way to the game. The rain hammers on the windows. We get out about five blocks from La Bombanera, Boca's colourful stadium that resembles a stack of orange crates. The queue isn't moving, and the rain isn't stopping. Guys are selling bin bags for ten pesos, an even bigger mark up than the tickets. I have to buy one of these too. After about an hour of this, we finally come within range of the stadium itself.

I say within range of the stadium, I mean within range of the River fans. From the top of the stands they are spitting and throwing piss onto the assembled masses. Worse thing is, I decided a few weeks ago that River would be my equipo in Argentina. It would be pointless telling them that now. Mercifully I avoid the piss, and any spit is washed away instantly by the lashing rain.

We're too late for a decent spot in the stands, so armed with a couple of overpriced choripanes we loiter about at the back. We can see the pitch, and soak up the atmosphere. We're covered from the rain, have wrung out our clothes and are out of sight of the piss chuckers. A team of guys spend the hour before kick off re-painting the white lines. Their efforts are in vain as the rain washes them away within minutes. They press on regardless. 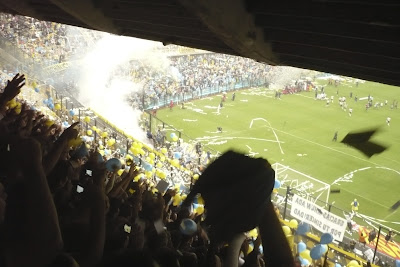 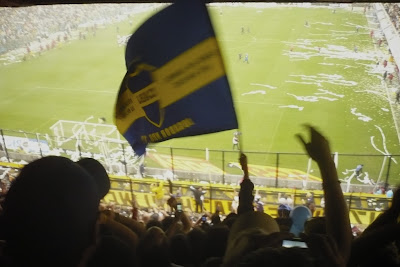 The atmosphere when the teams come out is electric. Chanting, stamping, singing, balloon waving, paper throwing, flare lighting madness. The stands above are shaking and moving a few feet or so as the fans jump and sing. I even throw a few bits of paper myself and try to work out what tense they are singing in. I think it's the imperative. I hear the word puta a lot.

The pitch is a joke; completely waterlogged. The referee agrees and stops the 'match' after ten minutes. Great. 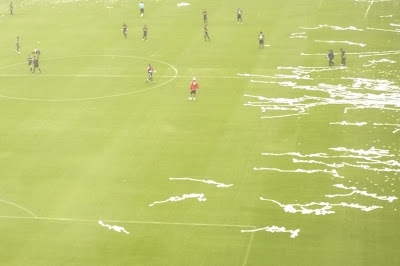