Stop and look about yourself in India, and you can't help wondering how anything gets done. It is the very definition of chaos: dishevelled, disorderly, in apparent disarray, and riddled with corruption and inequality. 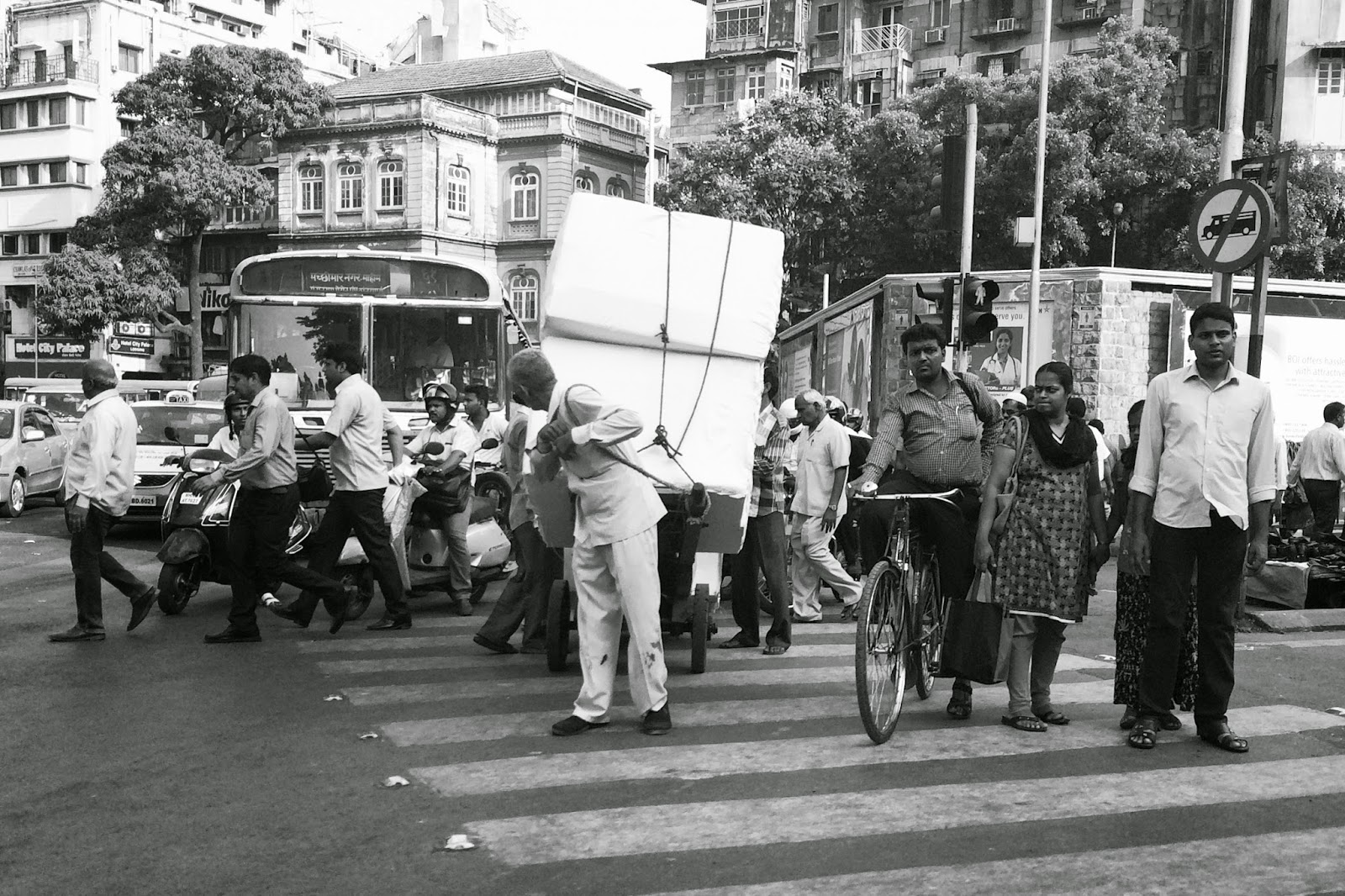 I'm probably not quite ready to hit the dancefloor just yet, but I am standing at the bar tapping my feet. This afternoon, the last before I fly home, my friend Srila told me I had just wobbled my head like an Indian. I glowed with pride.

First of all I had to block out the background noise; the traffic, horns, throat clearing and shouting. Then I got used to people not saying please or thank you. To having doors closed in my face and people barging in front of me in queues or wherever I happened to leave room. To having my personal space invaded by those who stand centimetres away when there is acres of space elsewhere. To putting my life on the line every time I got in a taxi or tuk-tuk. I got used to cows in the road, to head wobbling, impossible directions, to arduous administrative obstacle courses and haggling with rickshaw drivers.

Then I realised that if everyone is impatient, rude and inconsiderate, then no-one is. When everyone drives badly, no-one drives badly. The rules are, there are no rules. And nobody dare break them. Order, or a semblance of it, rises from the midst of this chaos because the denizens of the crazy zoo are tuned to its frequency.

Or, as Indians are fond of saying, “Sab chalta hai.”

And so it does.

It might look chaotic then, but extraordinary organisational and administrative feats are being achieved all around. The tiffin system in Mumbai epitomises this – 200,000 freshly cooked lunches are collected from homes and apartments in the suburbs and delivered to offices, schools and shops around the city every day. Five thousand dabbawalas execute this logistical miracle, making a mistake once in every six million deliveries. Nothing is written down, there would be no point - most of them are illiterate. 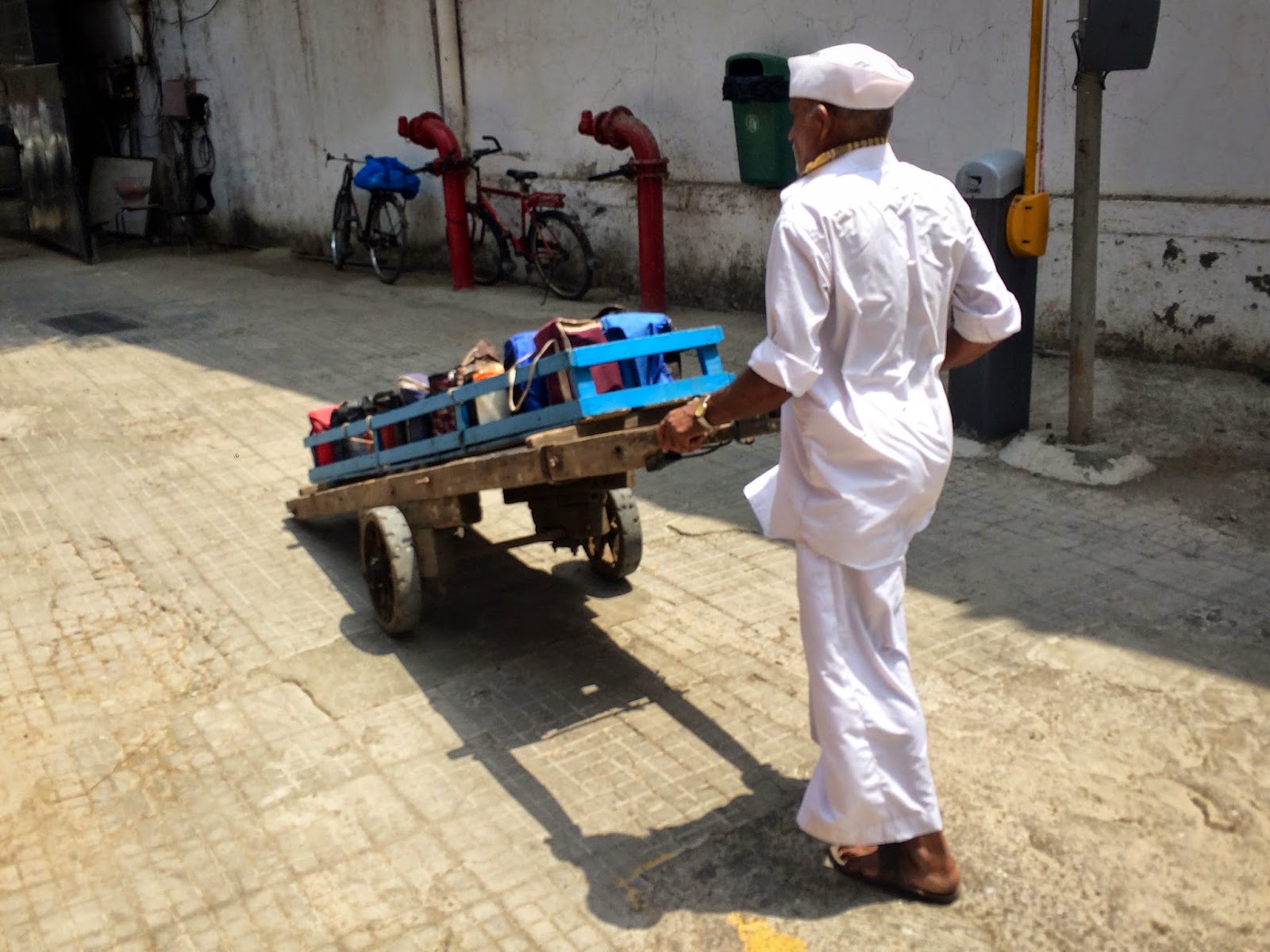 Down in Auroville the Europeans are still scratching their heads and bickering over how to create utopia, but in a corner of Mumbai, neither planned nor intended, a million people crammed into two square kilometres of slum developed a micro economy based on recycling, clothing, leather and pottery, that turns over a billion dollars a year. Dharavi.

There is poverty in Dharavi: poor sanitation, a lack of clean water, overcrowding and appalling working conditions. But there is work, and community and a sense of people trying to improve. All religions are here, living together peacefully and productively. Crime is low. Opportunity is high. I was shown around by one of many local guides who saw a chance to dispel the slum myth and cash in on curious tourists. Sab chalta hai.

Men are huddled in a dark room, ancient ceiling fans chopping through the thick, stifling air, smashing up plastic that has been gathered from the city’s trash. Smashing it, sorting it, grading it. Then it is crushed in giant machines (themselves manufactured in Dharavi, naturally) washed and sent off to be recycled. Two metres away in the next building, ten guys sit around their sewing machines making shirts. They sleep in the loft upstairs. They’re happy, smiling and welcoming. And they make 200 rupees a day (£2). No Dharavi produce is labelled or marketed - just sold off into the outside world. 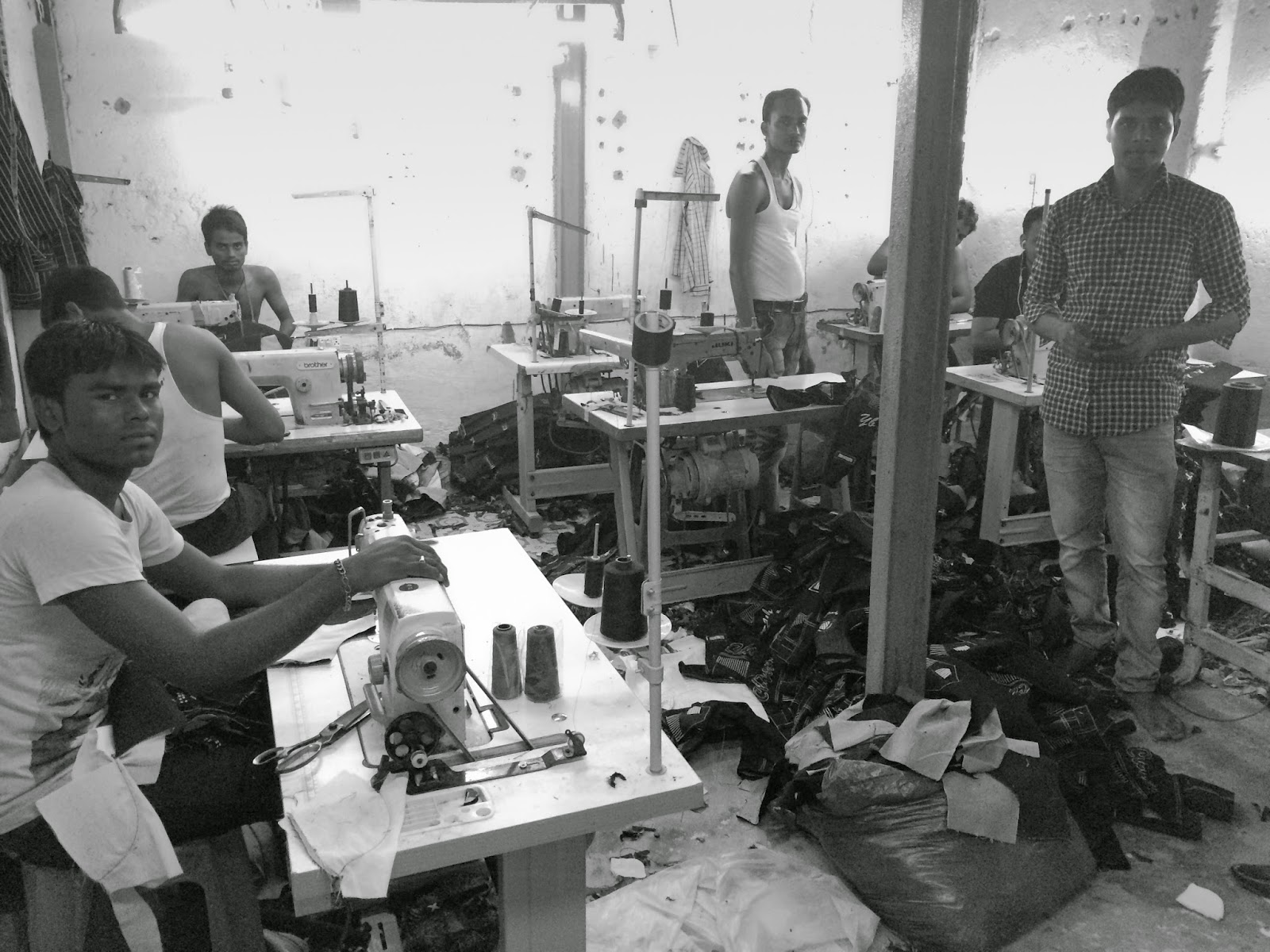 Sab chalta hai? Well, almost, but not quite. There is one toilet for around every 1,500 people. Much of the sewage diverts directly into Mahim Creek, an open waterway running through the middle of Dharavi. It fucking stinks, as you might imagine. What else it does, in terms of sickness and death, I cannot say. 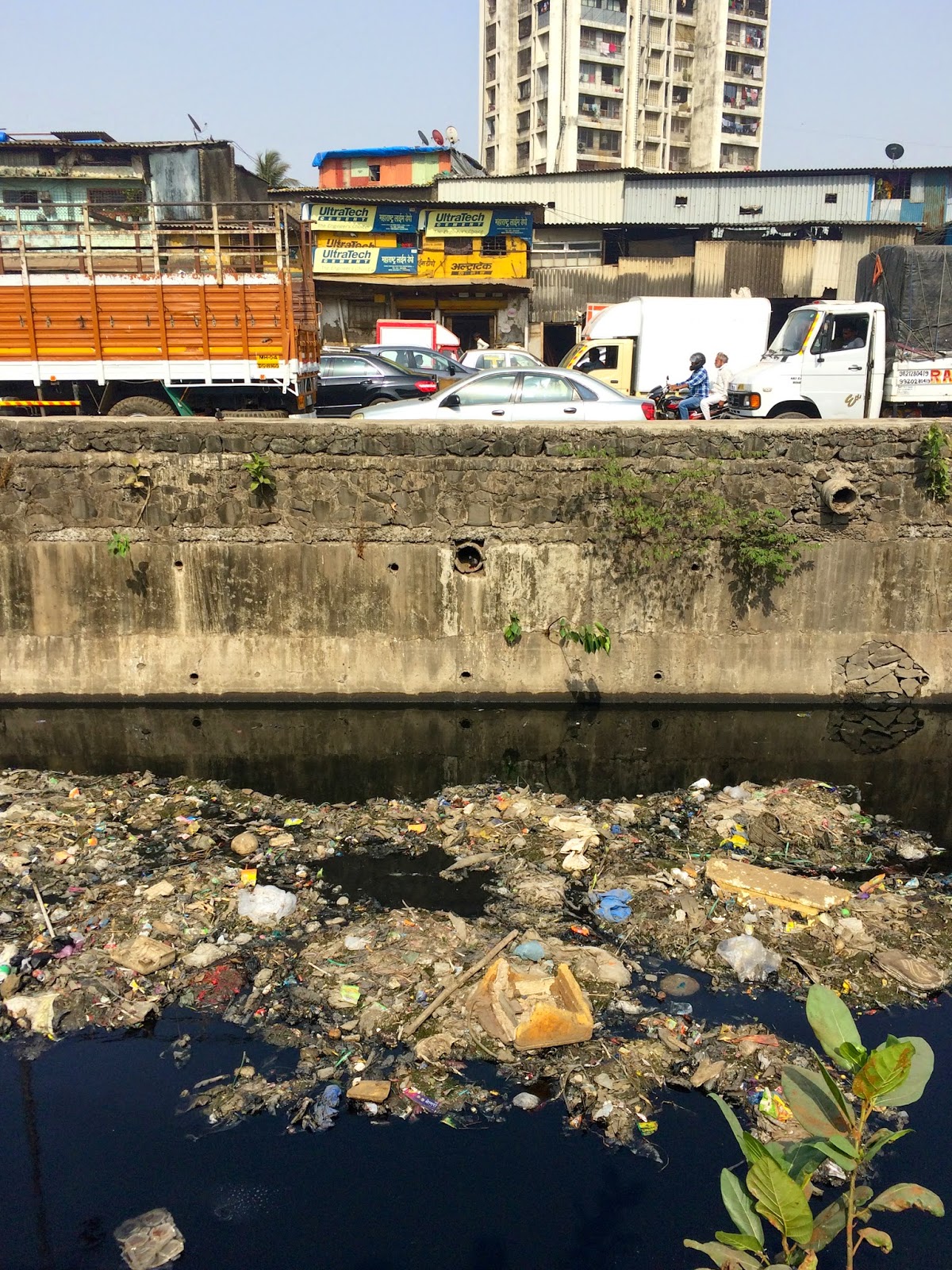 Ten kilometres east of Dharavi is the dumping ground of Deonar, where 5,500 metric tonnes of rubbish are deposited every day. The mounds of garbage rise as high as a twenty storey building. There is no guided tour here.

Sab chalta hai suggests things don’t need to, or won’t, change. That action is futile. And things do need to change in India, because the colour, character and effervescent humanity is just one side of the coin. The other is grubby and unmentionable.

Describing the incredible tapestry of life in the places I've visited, I’ve always been conscious of the loose threads that hang from the bottom. The men, women and children who sleep on railway platforms, under trees and in the gutters. The human beings who make for the shadows, where they blend so subtly into the darkness that it seems as if no-one notices them at all. The disenfranchised, the dispossessed, who seem to have more in common with the animals they share the streets with than the rest of the country.

A hierarchical society structured on caste cannot function without inequality, and it streaks through the heart of India like a skidmark. The fawning deference and subservience in the hospitality industry has its roots here, in a deep, implied inferiority or superiority, depending upon the happenstance of one’s birth.

Likewise the inequality between the sexes. And not just inequality, but a sinister, violent menace lurks just below the surface of everyday life. It’s betrayed by the furtive, rapey glance of a young shopkeeper at a passing western girl, and the sad testimony of a friend who has stopped noticing being groped in Old Delhi, it happens so routinely. In the streets where women don’t walk, the way men’s heads twist around to follow a female figure – not with a smile, which I guess we’re all guilty of, but with a feral urge to possess.

Plenty of them think it is acceptable to beat their wives. Marital rape is not a crime. In a country of such spiritualism and enduring humanity, these things need to be hoisted into the spotlight and addressed.

I love India. Love it in a way that I honestly never thought I would ten weeks ago. I've seen extraordinary things, every day; eaten incredible food, every day. I've met people, from India and all over the world, who have blown me away with the depth of their humanity and the sheer brilliance of their stories.

I don't want my last word on India to be negative, but these undertones rumble away quietly in the background, all the time. The music is blasting out around them, and the people  are dancing around the cow shit and the tired, prostrated bodies of the derelict. It's a great tune, and a great dance, and maybe it wouldn't be quite so crazy without them there. But they're there, and I wish they weren't.

Sab chalta hai only gets you so far, and if anything's going to change, someone's going to have to make it.