Old and new, black and white

Travelling is exhausting, so it’s always nice to finish up a trip like this with a relaxing week somewhere that allows you to really unwind and reflect upon your experiences. And so on Friday, upended by a ferocious hangover, I negotiated the living hell of Kathmandu airport and flew to that famous oasis of peace and tranquility, Delhi.

Delhi feels like a proper modern city. And then, somewhere in the middle of it all, is a proper old city: an insane hive of furious, impatient humanity that infuriates and delights in equal measure. Walking along Chandni Chowk, the spine of Old Delhi’s bazaars, I feel as though I’m on some sort of crazed fairground ride. I keep stopping to take it all in, which is probably the equivalent of holding onto the rail for dear life. 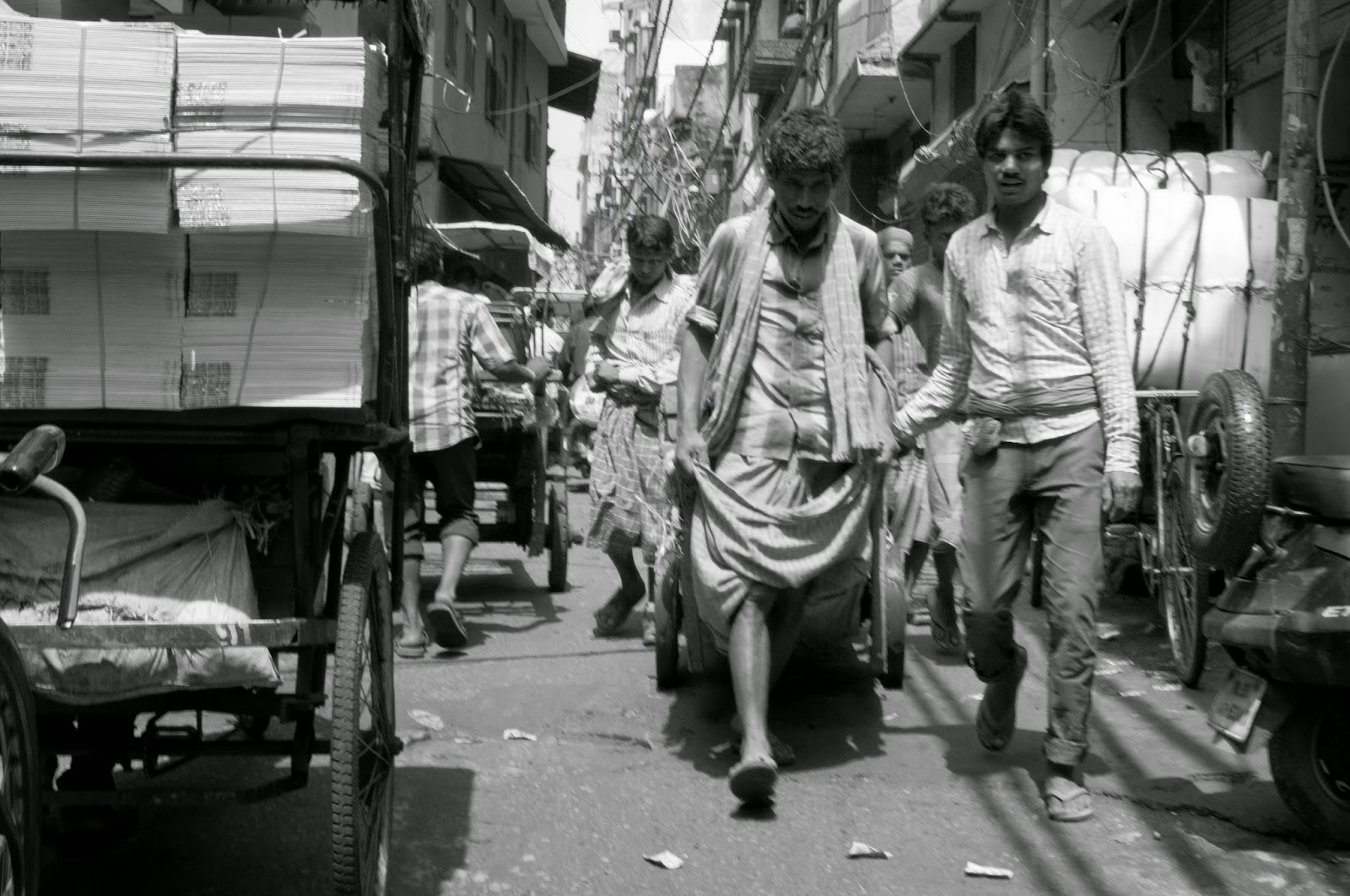 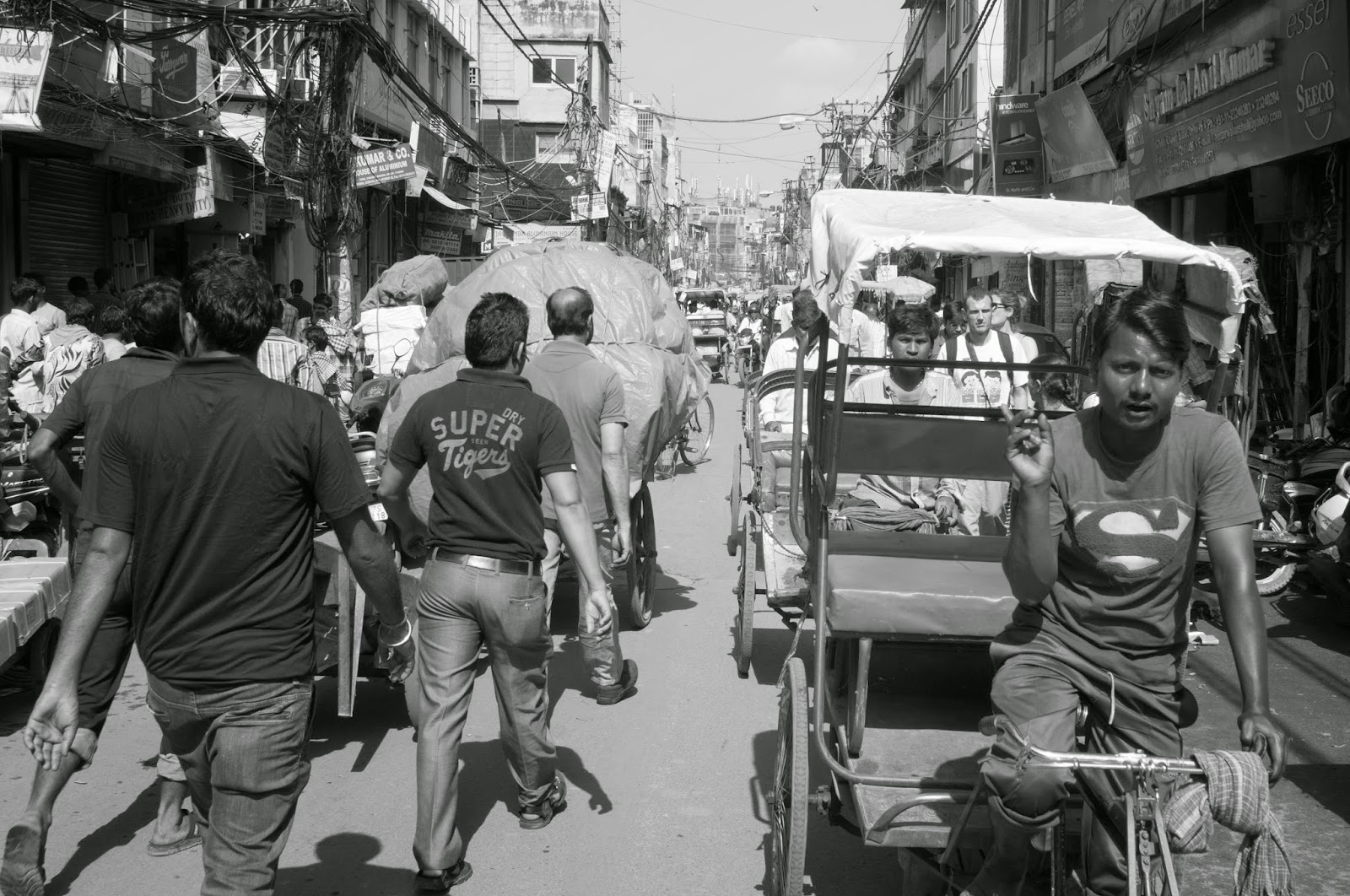 For reasons that elude me, the pictures I took here look much better in black and white. Perhaps it's because the colours don’t really matter; that the frenzy of human activity stops your brain from rendering them anyway. In monotone it somehow stands still for you to try and comprehend, which of course you can’t. 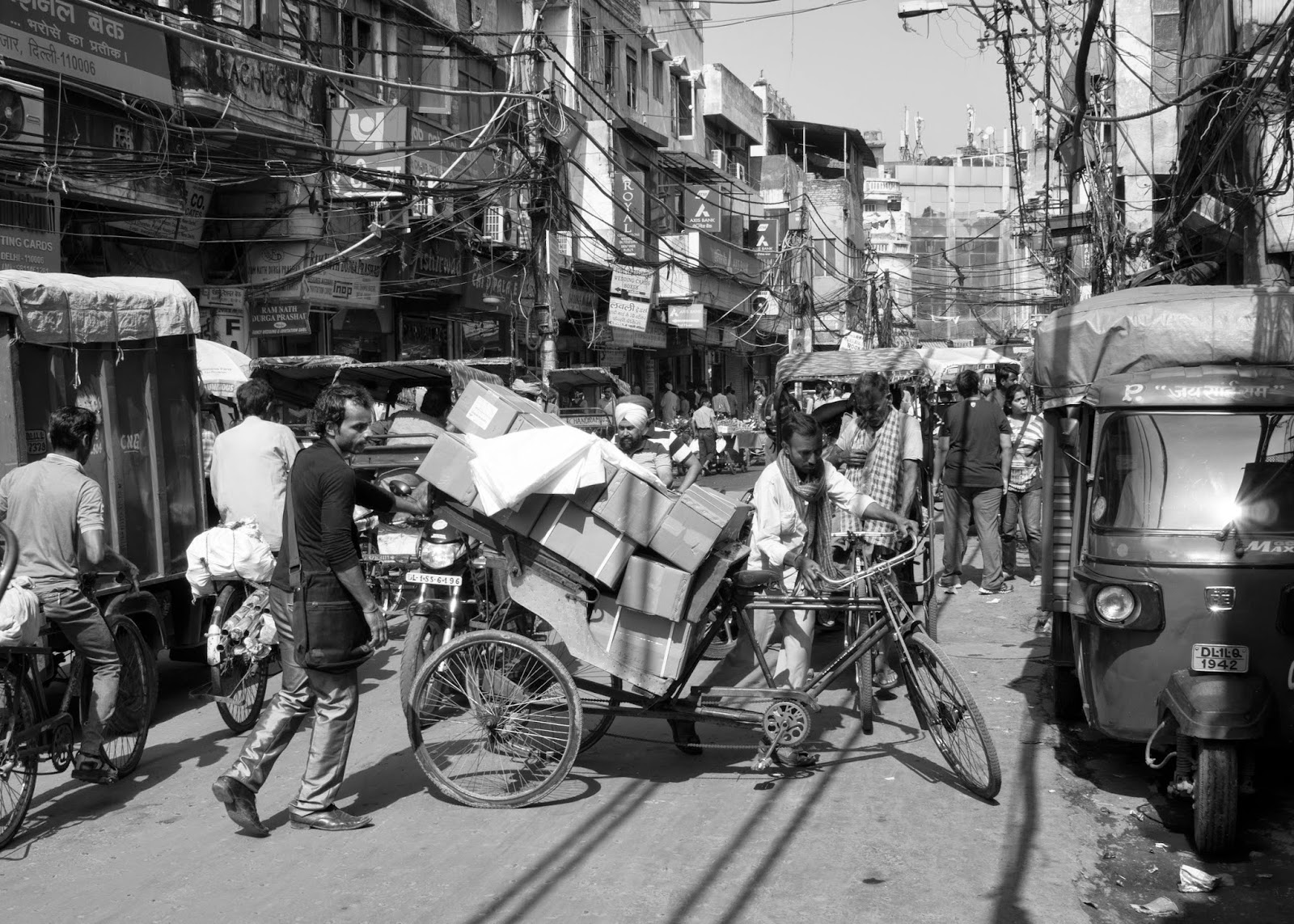 It had rained in the morning, and the streets were not clean. What I’d like to think was mud swished around everywhere, and a dead rat, trodden and trampled into the ground, perfectly flattened, was so matted in street slime that I barely noticed it. I was the only one that did. Miraculously, through this knotted tangle of streets, gridlocked with cycle rickshaws, scooters, carts and people carrying impossible loads, we emerged at Jama Masjid Mosque. 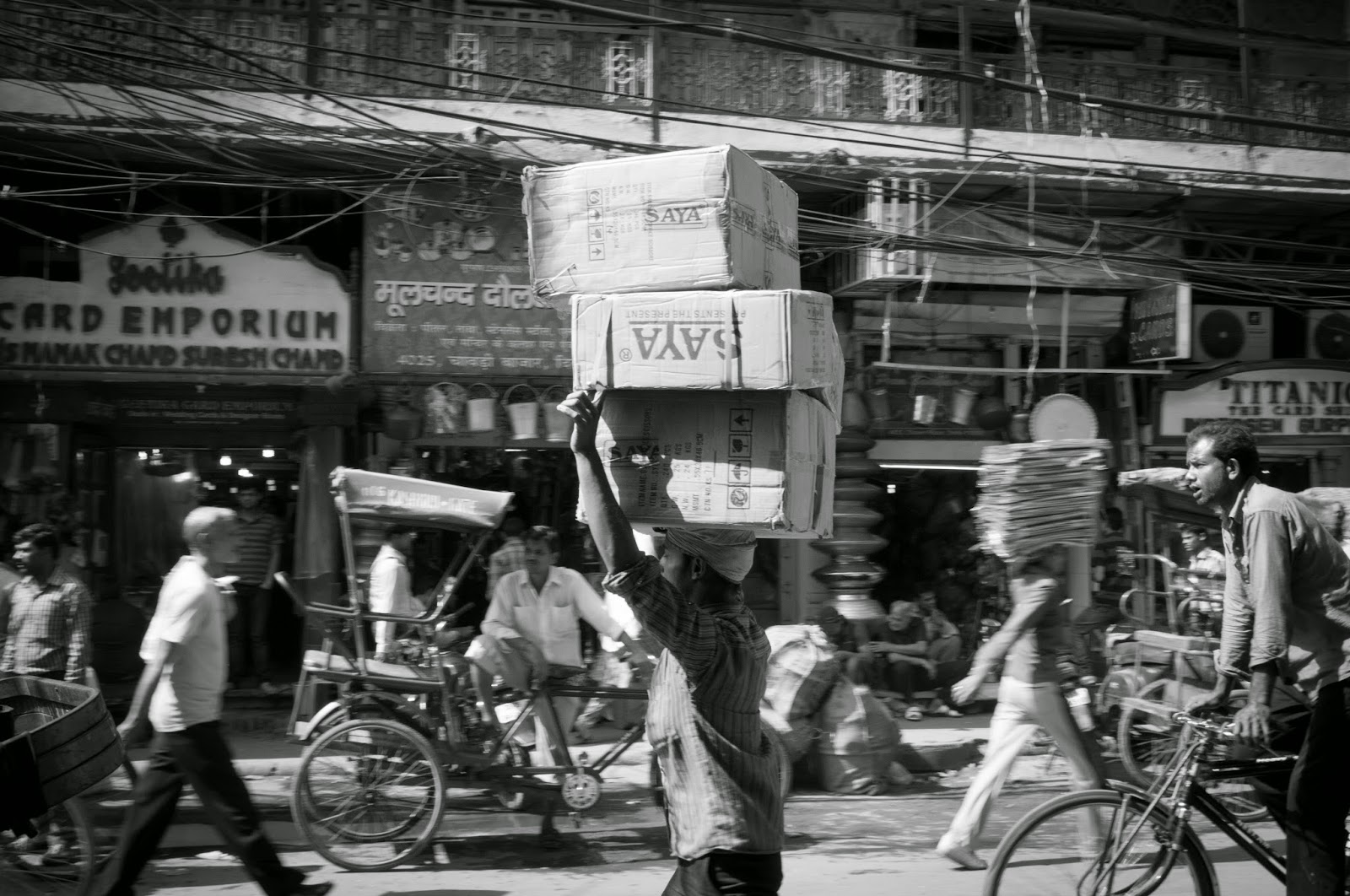 The only sensible thing to do was to enter the courtyard where a semblance of peace prevailed and we could stand unmolested. And then, to climb the minaret, a little aerial into the sky, so that we could look down on the ant farm below.

If perspective is the key to understanding, then I don’t know what this aspect contributed to my grasp of Delhi. Or India. Maybe the real epiphany comes with the realisation that the whole thing is so utterly incomprehensible that trying to understand it is pointless and irrelevant. When people stopped emerging from the stairwell, we climbed back down. 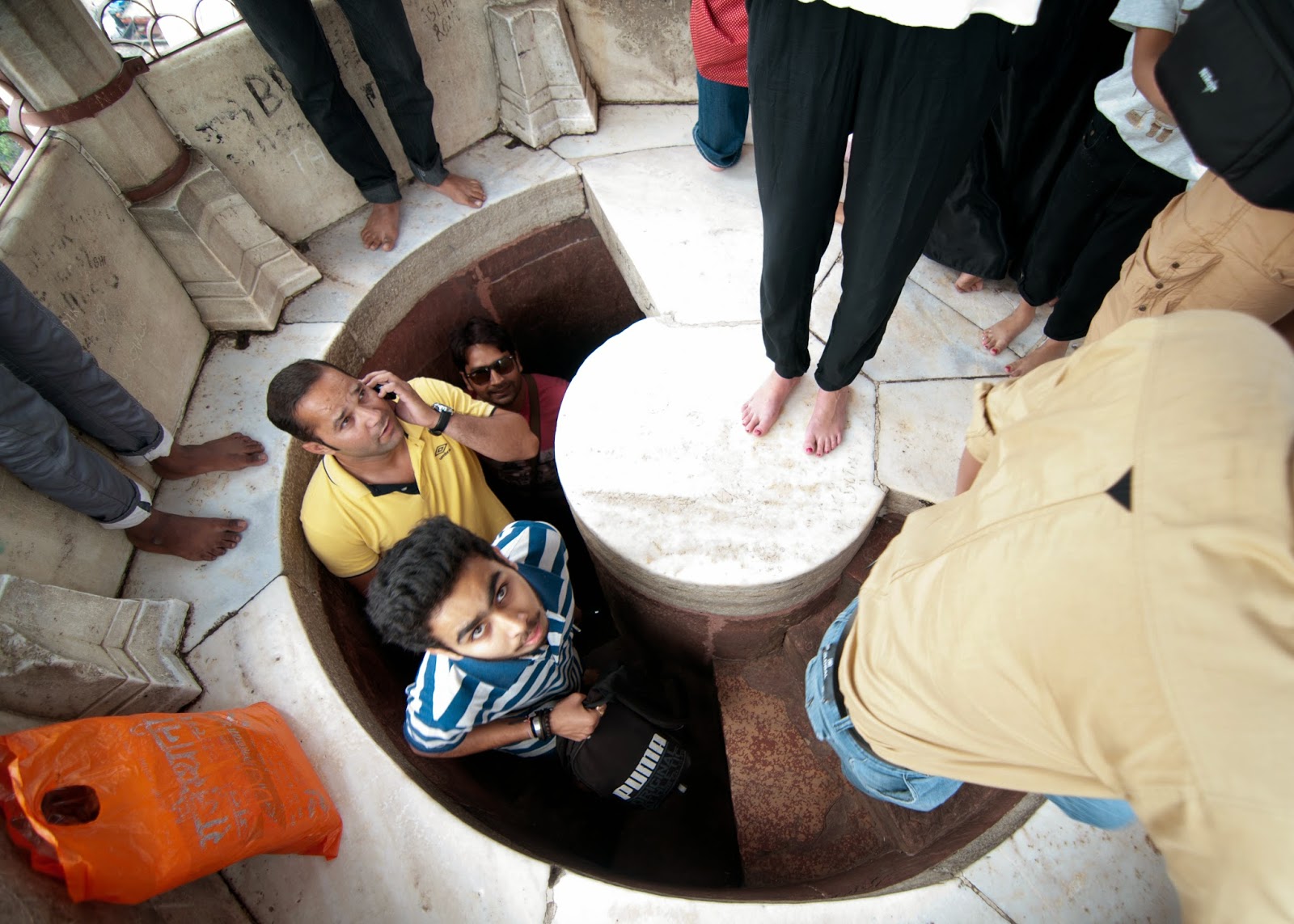 Back at ground level and I realise that Delhi feels different to other cities in India. The people more aggressive and impatient, rickshaw drivers more irritating and persistent. I find myself rising to them, ratcheting up the curtness of my refusals, and then out intimidating a security guard who tries to "fine" my friend 500 rupees for smoking somewhere she shouldn't have. I'd rather not be like this.

A shiny, clean and modern metro system has burrowed a warren beneath the grubby streets. It swallows us up and pops us out further south, in New Delhi, and for all the similarities with the Old we might as well have emerged on the dark side of the Moon. 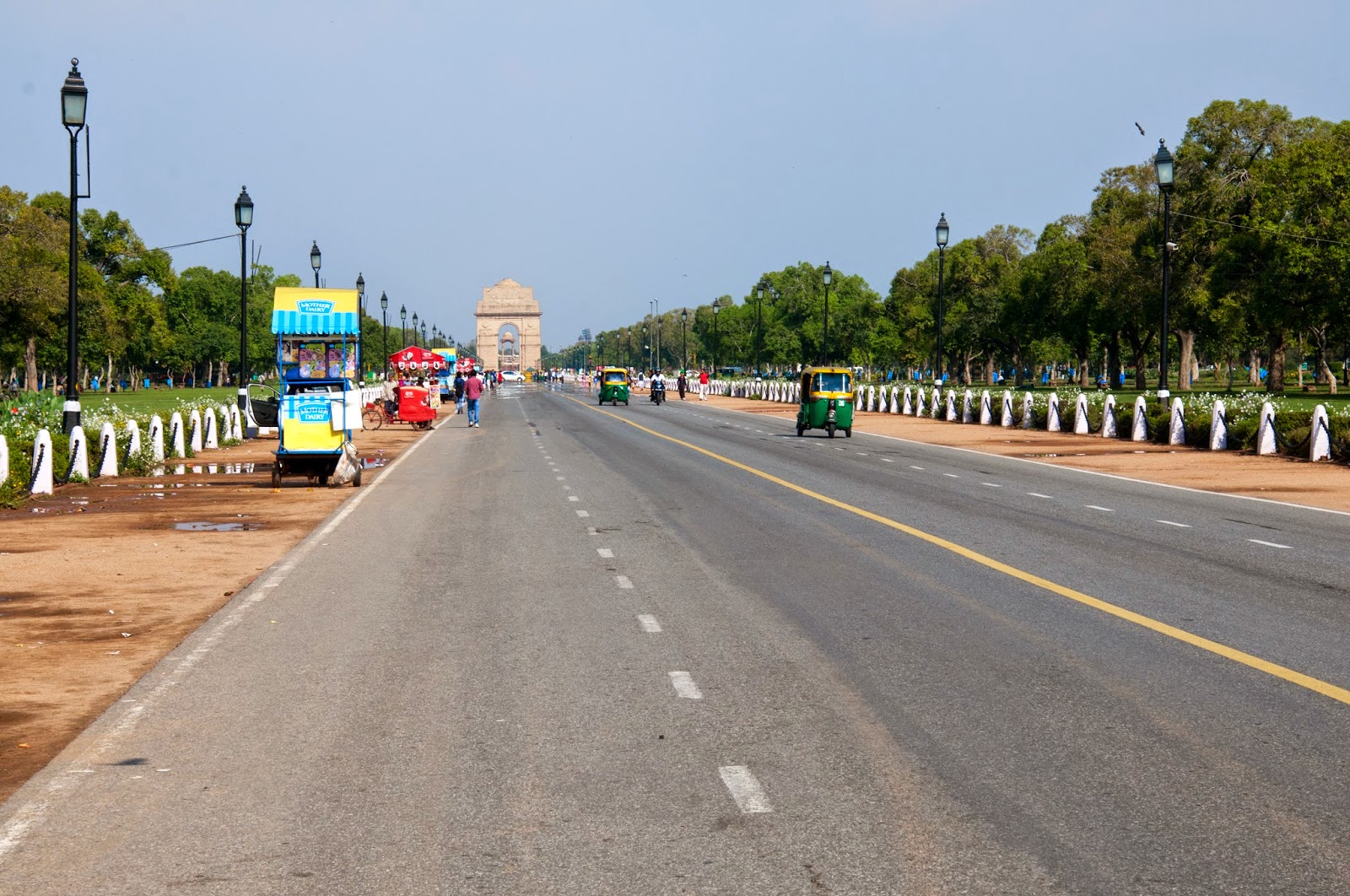 I won’t roll out the familiar cliché about two cities in one, because Delhi is numerous cities in one; sacked and rebuilt time and again as empires and rulers came and went. New Delhi is just the latest of them, planned and built by the British after 1911 as their capital. Further south is Qutub Minar, a twelfth century minaret standing improbably among ruins, themselves built upon the older remains of Dhillika, which had served as capital for the Tomars and the Chauhans for centuries.

If the chequered history of Delhi tells us anything, it is that mankind is forever destroying and recreating. There are times, when manhole covers are left off and their fetid contents fill the air, when men urinate freely and grope women in the street, when children throw plastic bottles into the road with churlish grins, that it seems as though Delhi is destroying itself again, from within.

I hope not, because it's actually quite a nice place. And if you lay down on the grass in Lodi Gardens of a Sunday afternoon, it's surprisingly peaceful and relaxing too.
Posted by Joe at 22:16

Email ThisBlogThis!Share to TwitterShare to FacebookShare to Pinterest
Labels: India