I drove all night

Driving on your own can be bloody boring at times, and not even the scenery is enough to keep you awake. You need music, conversation. With no CDs or Aux port, I am at the mercy of Kiwi radio stations. When there's a signal they actually play decent tracks, but the problem is the talking. Lots of talking.

It took me a while to tune into the accent. Clessic Huts on Radio Inzid. And then you have to guess what they're selling in the endlessly shit commercials that clog the airwaves. Massive bid sale, they say. Bids for what? Something for the kuds presumably. Unless they're too busy eating fush 'n' chups or you can't drag them away from the ixbox in the bidroom.

One easy distraction is to pick up hitchhikers, and there are plenty of them to choose from. I seem to stop mainly for Germans, though I managed to bag a rare Chilean on one trip, and yesterday a Kiwi who had clearly been on the piss all day and spoke with an indecipherable accent anyway. I reckon I'm the kind of guy you want to pick you up when you're hitching - the Chilean and his German mate got dropped at their hostel in Kaikoura and I even picked them up again the next morning to take them on to Blenheim.

Covering the whole of New Zealand in three weeks entails a lot of driving. 3,045 miles of it in my case, and still nothing like enough to get me even close to everywhere I would have liked to have gone. Northland and the Bay of Islands? Nope. Milford Sound? Nope (though I did fly over it, hardly the same as sailing up the middle). Christchurch? Dunedin? Tour a few wineries? Whale watching? Swimming with dolphins? No, no, no, no, no.

Yesterday I woke up in Wanganui in the west coast of the North Island and drove across to Hugh and Indri's place in Waihi Beach. For the six hours it took me to cover just under 300 miles, it rained incessantly. I'm sure I passed through wonderful countryside (the roads were winding enough to suggest I had) but I just couldn't see it. 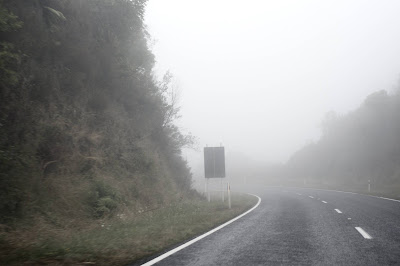 With the radio in a silent spell, and no hitchhikers in the mist, I got thinking again. Thinking about all the things that we come so close to but never see. Driving in these conditions is like walking by torchlight - you see where the beam shines, but nowhere else. It's not just the obvious things we miss, but people and places elude us by the tiniest margins, floating within our grasp but obscured on the edge of darkness. We don't even know they are there.

It probably doesn't bear dwelling on too much. We tread such a narrow path through life, that the multitude of alternatives will always be consigned to oblivion. Better make sure it's the right one then. Wheresoever you go, go with all your heart.
Posted by Joe at 05:34