It's funny how our perceptions of the world ebb and flow with our surroundings. Things start out pretty simple in the womb. Through childhood your world is small - house, school, grandparents' house. As we grow up, the world we physically inhabit expands, as does our perception of it; country, continent, planet. Universe. The number of people we know or remember increases as we encounter them.

At some point it stops expanding and, as we get older still, it begins to contract. We start forgetting things as our memories fail us; people, places. The spaces we actually inhabit become our world again; second childishness. And when that last act is over, we're stuffed into a tightly fitting receptacle once more. Back, in a sense, from whence we came.

A similar thing happens with people from different places. Their perceptions of time, space, distance, culture and others are shaped by their environment. It's why people from little country towns are more likely to be rednecks. And it's why if you're English, you consider a journey of anything more than two hours to be an enormous expedition only to be undertaken in the most pressing and unavoidable of circumstances.

Big countries, like Australia and the States make you immune to lengthy overland travel. Small ones, like England make you lazy and complacent. My tolerance has slowly increased over the last year; cover enough long distances and they begin to diminish; every step you take seems to foreshorten the next. And you learn through experience that most of the things you travel to see are emphatically worthwhile, encouraging you to make the effort more often.

With time more precious and finite than ever, I can't resist "popping" out to the Blue Mountains for a night from Sydney. It's only two and a half hours on the train, and will be my last chance to get lost in a little nature before the long haul home. I was thinking how I never "popped" to the Yorkshire Dales or the Cotswolds from London, and wondering why. Then I paid $7.80 for my ticket and climbed aboard one of Sydney's awesome double decker trains.

Katoomba is the main hub town in the Blue Mountains, and it gets you very close to the Three Sisters, the park's most iconic sight. With the mercury hovering around 40ºC, it's probably a bit hot for walking, but I stride out anyway. A long walk along the cliff, down 900 steps into the valley behind the sisters, round to Katoomba Falls and back up the (slightly sinister sounding) Furber Steps, and I am well and truly knackered. I was out for about three hours, and it took another three to prise the sodden shirt off my back. 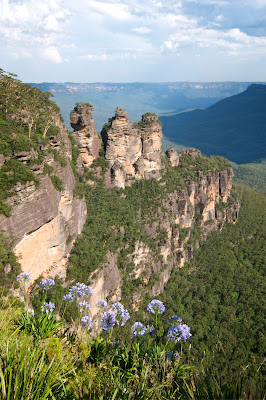 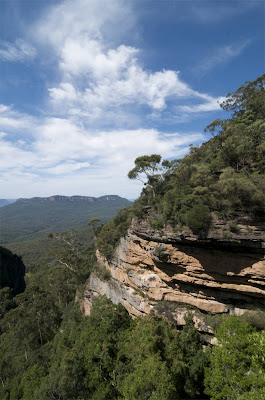 In the morning, and similar heat, I spurned the chance to lie around in bed and walked off towards Leura Cascades. There were hardly any other people about, so I found myself sharing the trail with the locals instead, and many of them were strangely calm and unfazed by my presence. 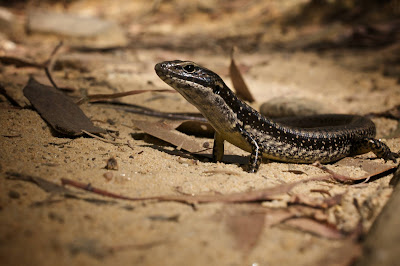 At the falls, I had a choice of heading back along the cliff walk or dropping down into the valley and through Fern Bower before, inevitably, having to climb back out again. There were plenty of moments on the endless descent, perspiration flooding my eyes, when I regretted my choice, but reaching the bottom and standing underneath Bridal Veil Falls wasn't one of them. 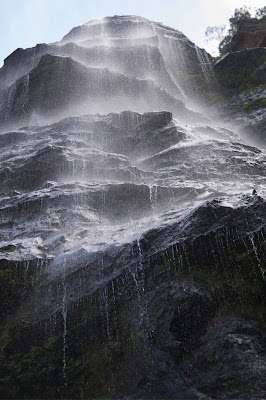 I boarded the train back to Sydney smelly, aching and knackered. But smiling contentedly, full of the simple joy that I get from being immersed in nature, and earning it through sweaty toil. I stared out of the window for a while before apparently dozing off, the perimeter of my tiny universe, which thankfully still seems to be expanding, nudged a little further forth.
Posted by Joe at 13:15