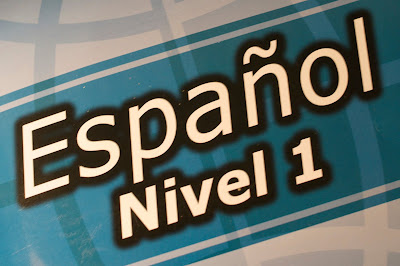 I had my first Spanish lesson yesterday morning and it couldn't have come a minute sooner. You don't learn a lot in your first four hours of a new language. It is a huge flashback to being twelve years old, and tip-toeing through the fundamentally alien concept of learning to communicate in a completely different language from that which you have grown up with. If that's hard when you're twelve, what's it like when you're thirty two and your tiny brain has been addled by twenty years of extraneous and often pointless learning, washed away with various cocktails of drink and other noxious substances, and emaciated by the emotional rigours of life? Actually, it seems a lot easier.

People bang on about the capacity of children to learn things quickly. Watching my two year old niece's vocabulary double every week, and now reaching the stage where she is more than capable of outwitting and taunting me should she so wish (she's too nice to do so I think), I would tend to agree. But you know what, when you're twelve, you've got a lot of other stuff to learn and, well, you're twelve, for crying out loud. You know nothing.

In my eight years as a bookmaker, I could probably have named over 50% of the UK population of racehorses, their trainers and jockeys. Half of them I could probably tell you their last run, or at least what they'd won. Half again, I could probably tell you what ground they like, their best trip, which tracks they'd go best on, which races I'd aim for if I trained them, who I'd get to ride them and, most crucially, what kind of price they should be. I no longer need to know this information. So I figure, letting all that drift slowly from my mind, I must have created a hell of a lot of room up there, even accounting for the self assisted decline in grey matter that must surely claim us all eventually. So filling it with a few choice words of Spanish can't be that hard. Surely?

I have many friends who have taught English as a second language. I could never really understand how you can teach someone a language if you don't speak theirs. But now I do. You adjust to listening, you pick up notebooks full of new words every hour, and you are forced to think and express yourself in the language you're learning. The upshot of this - confidence. Before yesterday's lesson, I was afraid to even order a coffee. Now I'm sipping tea and getting shirty about how I like my toast, even if I'm not deploying my newly acquired linguistic skills and telling people via a giant speech bubble "Yo soy Tom Cruise. Soy actor, y soy muy bajo..." 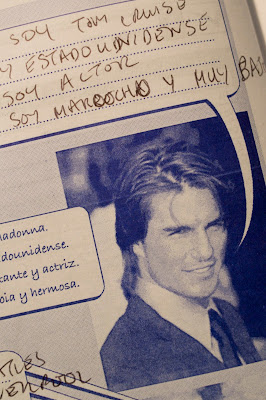