Exactly one week ago today I was embarking upon my first outing in Buenos Aires. With great trepidation and sweating prodigiously in the cloying heat, I wandered around aimlessly, conjuring up the most infirm excuses to prevent me from venturing into any bar or restaurant threatening to take my fancy, so scared was I of having to stand and stutter and attempt to excuse my ignorance with incomprehensible mumblings.

Technically it was a week but last weekend was an aberration: purgatory from which I was mercifully expunged. The last five days flew by. Spanish from 9am until 1pm. Cooking from 6pm until 9pm. Three o'clock. Three o'clock in the afternoon is always too late and too early for anything you want to do. And so, with the odd moment wedged firmly in the middle, there was precious little to do with my short interregnum.

On Thursday I passed it in San Telmo. Four of us from Spanish class had lunch, after which Roy (an Israeli kid) and I found a bookstore. In the last year or so, I have been making an effort to re-read books I first encountered when I was too young to appreciate them, so was thrilled to find a copy of Demian by Hermann Hesse, which I first read as a teenager.

I made a decision earlier in the week to move to a different apartment. It’s going to cost me, but this place is basically shit. The kitchen is scarcely big enough to facilitate kettle boiling, let alone cooking. 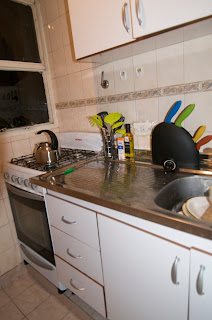 Cup of tea anyone?
But worst of all, the sound of my neighbour flushing the john in the middle of the night is deafening. Since he is an octogenarian, this happens fairly regularly. I found myself propped up in bed in the small hours reading Demian once more. I move on Monday, insha’Allah.

Long after dawn, I switched on the laptop and read of the collapsed minaret in Meknes. It saddened me so very much. Just a few weeks ago I was there; completely enamoured by the people; their warmth, spirit and kindness. There is something especially terrifying about tragedy when suffered by those at prayer. That a benign God is unable to prevent their demise, only serves to remind us of our frailty and impermanence.